The case involved an employee, Mr. Nagribianko, who was terminated from his position with Select Wine Merchants (“Select Wines”) without cause one week before the end of his six-month probationary period. Select Wines did not allege just cause and Mr. Nagribianko brought a wrongful dismissal claim against his former employer.

The Small Claims Court Trial Judge found in favour of Mr. Nagribanko and awarded the equivalent of four months of salary and benefits in lieu of notice. This decision was based primarily on the finding that Select Wines had induced Mr. Nagribianko to leave another job to work for Select Wines which had offered him greater responsibilities and more opportunity for advancement.

The Divisional Court reversed the lower court’s decision, holding that Mr. Nagribianko was not entitled to reasonable notice because he was dismissed during his probationary period after receiving a reasonable opportunity to demonstrate his suitability for the position.

The Court of Appeal

The Court of Appeal largely upheld the findings of the Divisional Court, and further elucidated the concept of probation as it relates to employment law. The Court rejected the argument that Mr. Nagribianko’s subjective understanding of the probationary period should have been taken into account when assessing the meaning of the contractual term. The Court of Appeal found that the term ‘probation’ has an unambiguous meaning at common law and that a probationary period entitles an employer to dismiss an employee without providing common law reasonable notice at any time during that period, provided that the employee is given a chance to demonstrate their suitability and the employer determines in good faith that the employee is unsuitable for continued employment.

The Court of Appeal confirmed that no written agreement can purport to contract out of the minimum standards of the Employment Standards Act, 2000 (the “ESA”). As such, although dismissed probationary employees are typically not entitled to reasonable notice at common law, they are entitled to their termination entitlements pursuant to the ESA. The Court of Appeal applied this principle in holding that Select Wines could rely on the probationary period to terminate Mr. Nagribianko’s employment by providing him only with his ESA minimum entitlement of one week of pay in lieu of notice.

This case reaffirms an employer’s right to implement probationary periods and rely on them as a means of assessing the suitability of new employees. Importantly, it also confirms that employers may dismiss probationary employees without providing reasonable notice under the common law, even if there is no separate termination provision set out in the contract

This case is an example of one of the three instances where an employer may dismiss an employee without providing reasonable notice. Those instances are where:

In all other circumstances, employers must provide reasonable notice to employees upon termination. This case therefore exemplifies the importance of implementing clear, enforceable written employment agreements containing important clauses that set out the respective rights and obligations of the employer and employee, such as clauses pertaining to probationary periods and entitlements upon termination. 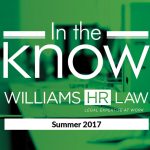