A series of Ontario decisions in 2017 and 2018 demonstrated that termination clauses are tricky business! Many employers include termination clauses in employment agreements which set out the entitlements of employees upon the termination of their employment. Typically, the aim of these clauses is to rebut the presumption of common law notice and restrict the employee’s notice to what is statutorily required under the Employment Standards Act, 2000 (the “ESA”). However, drafting a termination clause that successfully accomplishes this aim is more difficult than many employers would expect. A recent decision out of the Ontario Divisional Court has tied together many of the principles derived from recent case law and provides additional clarification as to how termination clauses will be interpreted.

In Movati Athletic (Group) Inc v Bergeron, the Court reviewed a decision of a motions judge which had found that a termination clause in an employment agreement had not been sufficiently clear to oust the presumption of common law reasonable notice. The wording of the termination clause read:

“Movati Athletic Inc. may terminate your employment without cause at any time during the term of your employment upon providing you with notice or pay in lieu of notice, and severance, if applicable, pursuant to the Employment Standards Act, 2000 and subject to the continuation of your group benefits coverage, if applicable, for the minimum period required by the Employment Standards Act, 2000 as amended from time to time.”

The interpretation of the clause’s enforceability turned on the words “pursuant to the Employment Standards Act, 2000” and the different wording which had been used in the termination clause applicable to the employee’s probationary period. The Divisional Court found that the wording used in the termination clause gave rise to two possible interpretations: one that ousted the employee’s entitlement to common law reasonable notice and limited the employee’s termination entitlements to the minimum period under the ESA, and one that did not. The issue was that the clause did not explicitly limit notice or pay in lieu of notice to only what is provided for in the ESA. The words “pursuant to the ESA” could be interpreted to mean that the notice would comply with the terms of ESA but not oust the presumption of common law notice. The Court noted that the terms of the employment agreement that governed the employee’s probationary period had used the words, “only providing you with the minimum notice necessary to ensure compliance with the ESA as amended from time to time.” The two provisions are clearly distinguishable by what the Motions Judge referred to as “warning signs” such as the word “only” which was included in the probationary clause, but was not included in the termination clause applicable to the employee at the time of her dismissal.

The Divisional Court found that the use of different wording in the probationary clause and the termination clause indicated that the drafters of the agreement had intended to give meaning to that difference. The Court also invoked the rule of contra proferentum which, in the employment context, dictates that ambiguities in employment agreements drafted by the employer ought to be interpreted in favour of the employee. Since the termination clause could be interpreted both to oust the presumption of common law reasonable notice and not to oust the presumption, the agreement was interpreted to give the employee the greater entitlement which was common law reasonable notice.

The court reached this finding after distilling past case law on interpreting termination clauses into eight key principles: 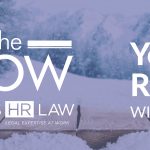